We are about to spend two weeks examining the institution of slavery in colonial America. However, to kick off the unit, I decided to spend two days exploring the idea of modern day slavery. I did this for two reasons:

I was a bit nervous going in, because this was my first time developing a lesson specificially to build empathy (what if they rebelled against it…or even worse, didn’t care?). But nevertheless, I felt strongly that the effort was worth the risk, and was cautiously optimistic that it would be successful.

Coming in the door, students saw this map on the board. 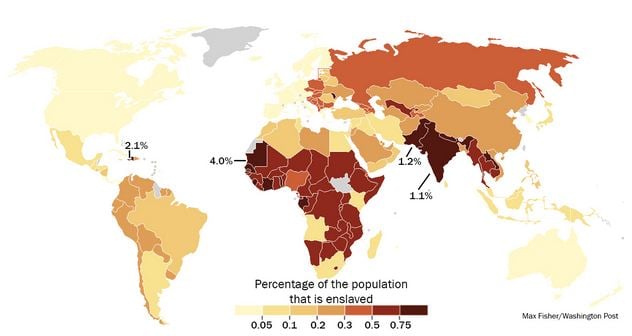 Happily, many students stopped to examine the map, and even talk about it as they realized what they were looking at.

I spent about five minutes introducing the idea of modern day slavery using the map to highlight “hot spots” like India, S.E. Asia, and Africa, but also to demonstrate the truly global scale, and the fact that United States was part of it.

Then, I told them we were going to use a series of videos to look deeper at modern day slavery, and that it might make them a little sad or mad…but that would be an appropriate response. I did not want them to take any notes during the videos, they just needed to really watch. At the end of the day, they would write a short journal response. (We do a lot of reflection work in class, so they are quite used to using journals as an exit ticket). To prevent the mood from being broken, I had the students get paper and pencil ready to go before the viewing the videos.

The first video was a excellent, quick summary of the facts and figures of modern day slavery. I stopped the video once to explain the concept of trafficking, and how that was what happened to the Africans during the colonial slave trade.

The second video was a real gut-punch in terms of generating empathy. The students were riveted. On a side note, watching this five periods in a row was a bit draining for me.

The students were pretty subdued when I turned the lights on afterward, and there were tears evident here and there. I quietly asked them to spend the last few minutes writing. They could write whatever they wanted. I would eventually collect it, but it wasn’t for a grade. If they wanted to write anonymously, they did not have to put their name on it. It was more important that they express themselves honestly.

The warm up for the second day was a PowerPoint slide of a brief journal relfection I created in response to the TED video.

“Although I knew about modern day slavery already, the video really made it more real for me because I saw pictures of people actually living in slavery today. It’s weird to think that right at this moment, they are still out there suffering.”

I shared my thoughts and feelings about the videos, and then asked the students to pair-and-share with partners for a few minutes about their own reaction to the previous day’s content.

While the previous day had focused on global slavery, I wanted to bring the issue closer to home and show students that modern day slavery exists in the United States as well. Again, I asked students to simply watch the final video without taking notes, but assured them that we would have time for discussion and journaling afterward.

I think this video was powerful because it was recent, occured close to us (I teach in Pennsylvania), and the girls that were held in slavery were young, worked in the open, and lived in an ordinary-looking neighborhood. Additionally, I thought it important to hear stories of people that had escaped or been rescued from slavery.

When the video concluded, I told my students that I thought it important that we discuss what we had seen over the past two days. However, I only wanted them to share if they were comfortable, so I promised not to call on anyone unless they volunteered. To provide a non-verbal means of group expression, and to provide structure for the discussion, I invited students to come up to the white board and write a word that best represented their feelings. I led the way by writing “Guilty” and “Hope”. And then I waited…

Each class responded differently. In some, students immediately got up and started writing. In others, there was a bit of hesistation as everyone waited for someone else to go first. My honors class was particularly apprehensive. After a minute or so I helped them out by quickly reading through the lists of words that the other classes had created. That worked like a charm, and students immediately rushed to the board. I started discussion by talking about my two words.

Guilty: I feel guilty because I have a good life with a lot of opportunities, and it is painful to see and hear about so many other people trapped in horrible situations. I also have to admit that I’m at least a little bit a part of the problem because some of the things that I own were probably made in part from slave labor. (I didn’t want to beat them over the head with this, but I thought it important to make a connection to the larger global system).

Hopeful: Although the problem is big and scary, it was important to see and hear examples of people that are fighting against it, and people that have escaped or been rescued. (I wanted to plant the seed they can take action. I am hoping to leverage this lesson into a larger service project).

To give all students a chance to verbalize their feelings, I asked them to pick any word from the board that resonated with them, and discuss it with their partners.

After a few minutes, I opened the floor for a wider class discussion. I didn’t really have an agenda for this part, as I just wanted to be responsive to each class. Generally, two or three students led the discussion in each class. If there was a lull, I’d say aloud one of the words from the board, and ask if anyone wanted to respond to it. Sometimes students asked questions like, “How could this happen?” or “Why doesn’t anyone stop it?“.

The only thing I could in those instances was to be honest.

Slavery is about money. People do it because they benefit from it financially.

I don’t know how to stop it, but I want to learn more and try to do something.

Then, I asked them to journal one more time. Again, I gave them no prompt or direction, they could write whatever they wanted. They did not need to put their name on it if they wanted to stay anonymous, but I was going to collect their journals, because their thoughts and feelings were important to me.

Finally, I made a wordle of the combined student one-word responses. I think this will be useful to show later in the unit to help maintain the emotional connection to the content. It also serves as a powerful bond between the students across all of the classes. 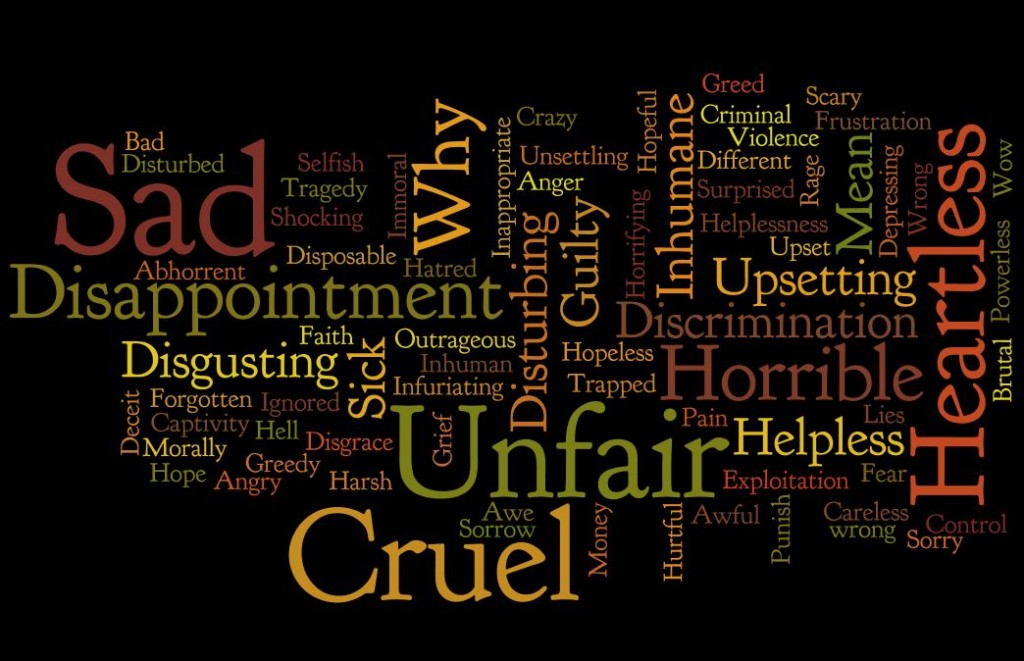 For the future, I’d like to get permission from some of the students to make a blog post of their journal responses. Also, I hope to organize interested students into conducting a awareness campaign, and possibly some sort of fundraiser event to support an anti-slavery N.G.O. Fingers crossed…

Check out my Frederick Douglass lesson!

Check out what students thought about the lesson!