I am incredibly happy to be teaching a course where I can focus on contemporary issues. The content stays fresh. Students are generally interested and engaged. Everybody wins.

Still… every now and then it can be a little intimidating. Say for example if you are doing a unit on the Middle East and you want to help 8th graders understand about Israel and Palestine.

Let’s face it, there are a lot of places to potentially get bogged down in those three simple questions. To me, the clearest way forward felt like keeping a tight focus on the question of territorial disputes. It is impossible to ignore the powerful motivation of religious beliefs or the cumulative effects of generational violence, but at its core the dispute is, and has always been, about who controls what pieces of land.

First things first. We needed to get a sense of how Israel fits within the complex puzzle that is the Middle East.

To start, I gave a short introductory lecture on the Ottoman Empire, and how its collapse after WWI created a vacuum in the region, which led to brand new states being created over the next few decades. I find it is usually a bit of cognitive dissonance for students to grapple with the idea that national borders can change over time. However, in the case of Israel, the idea of shifting borders is absolutely critical to understanding the conflict.

Then, we spent some time examining a timeline of the region. Since this was the beginning of a broader Middle East unit, not just a focus on Israel/Palestine, students were given this graphic organizer to help them unpack the various “relationships” on their timeline.

Afterward, we took a whole class period to discuss the key events on the organizer, with the bulk of the time going to key events for Israel. This was primarily just an informal KWL session to prime the pump and begin to generate a framework.

Once we identified some of the key people, events and locations it was time to give a little more structure. One of the first things to understand is that the relationships between Israel and surrounding Arab states, and Israel and Palestine, are closely related but should be considered separately. Based on key events from the timeline, we developed this T-chart and I provided an timeline map series. 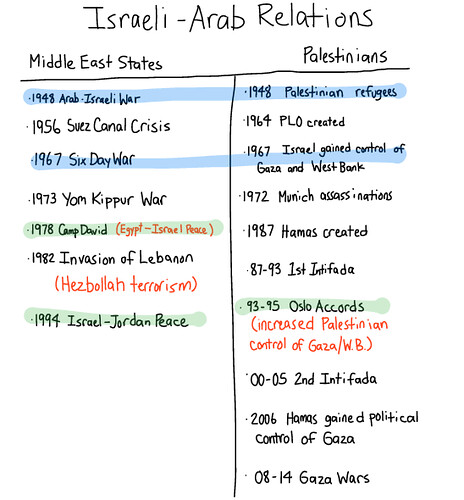 *BLUE highlights are key events that had significant effect for both columns. 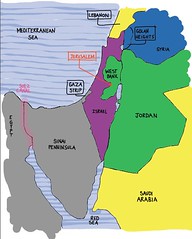 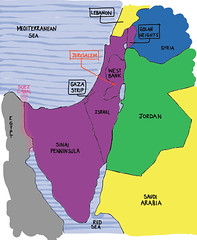 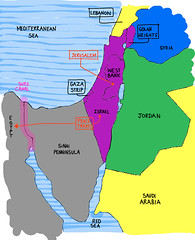 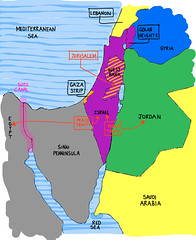 Key takeaways: There was a fundamental disagreement about the partition land to create the state of Israel. During the resulting Arab – Israeli War (1948), hundreds of thousands of Palestinian Arabs were displaced from their homes. Many would resettle in the areas of Gaza and West Bank, which were controlled by the Arab states of Egypt and Jordan respectively. The situation escalated when Israel annexed Gaza and West Bank during the Six Day War (1967). Although the Palestinians were given some autonomy as a result of the Oslo Accords (1995), several key issues (e.g., partitioning of the West Bank and Jerusalem) have never been fully resolved.

Then I presented a series of short videos to explore some of the key locations and disagreements. These videos also provide some context for a lot of information that students will see again in their note taking assignment.

Why are Israel and Palestine Fighting? – Provides an introduction to the land disputes that pre-dated the formal creation of the state of Israel.

Understanding the Situation in the Gaza Strip – Historical context of the development of Gaza Strip as an exclusively Palestinian controlled territory, and the details of the current blockade and standoff between Hamas and Israel.

Why Jerusalem Matters To Israel and Palestine – It’s still about land…but this also the one place where the clash of religions is at its most powerful.

Now that students had a framework for understanding, it was time to have them examine the issues in greater detail. There are a number of great text resources to available online, but these are my two favorites.

Palestine, Israel and the Arab Conflict: A Primer – This is published by the Middle East Research Project and is probably more appropriate for high school or college students. It is downloadable as a pdf though, so might be a more flexible option for most classrooms.

What are Israel and Palestine? Why are they fighting? – This is published by Vox. It has great organization as it presents each main idea as a “card”. There are tons of links to external articles and even internal links betwen topic cards. However, this is only available in digital format (unless you cut/paste the content yourself – probably more trouble than it’s worth if you ask me). I am lucky enough to work in a 1-1 iPad school, so this is the resource we used.

Students were given two days in class, plus an additional week outside of class to complete this list of summary questions. We’ve done this before so they were already familiar with the basics of the assignment. I basically just grade this for completion – it’s basically just a long term homework. The best part about these types of assignments is that they create a natural framework for student-driven discussion.

It is very important to keep a human face on this conflict – it can’t just be about “Israel” and “Palestine”, so I collected a series of videos to try and show how people’s lives are impacted on both sides.

15 seconds – This is part of a series of videos  created by the Israel Foreign Affairs Ministry. I think it serves as a pretty good hook for the students.

Israel – Gaza Conflict: Rockets and Airstrikes – A “man on the street” type video by the New York Times with both Palestineans and Israelis. This might be a little too graphic (i.e. visible blood) for some classrooms, so use your best judgement.

The Current Israel – Gaza Conflict Explained – This dovetails nicely with the previous video. Basically the New York Times video is closer to “raw” footage, while this one is commentary.

First Day of School: Gaza  – Profiles a single family living in a shelter in Gaza. They lost their house during the July 2014 Israeli ground offensive.

By this point, I think the most important thing is to just give students time to talk throught their ideas, and ask questions they’ve developed over the previous week or so of gathering information. The summary question assignment (from the Digging Deeper section) is the core framework for class discussion, but I think it is important to let students take the lead a bit as well, as long as it stays relatively on topic.

A lot of students ask me, “Who is right?” or “Is (fill in the blank) the real ‘bad guy’?”. This is probably the biggest land mine for me as a teacher. The best I can do is simply help them to understand the facts on the ground, and let them make their own decision. But I tremendously appreciate that they are taking it seriously. They really want to figure this out.

Yes they are. But..it’s complicated.

We’re not going to find the answers in our classroom, but it is vitally important that we at least try to understand the problem.