The results are in. These data are based on surveys the students completed at the end of the unit.  Just over half of my students agreed to let me use their responses (I included an “opt-in” checkbox on the survey). 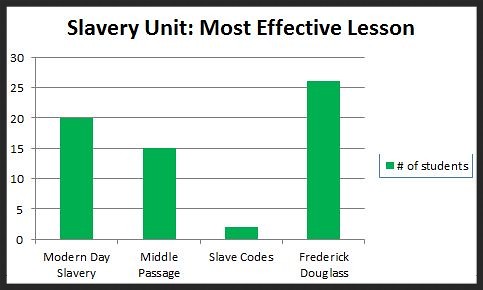 “Modern Day Slavery because I learned so much about what is going on in our world right now that I had no idea about.”

“Modern Day Slavery because even though other lessons were powerful, this really prepared us and got our emotions  show through before we start it.”

“Middle Passage because I felt so much empathy toward the slaves.”

“The most effective lesson in the slavery unit was the Middle Passage because it taught us how they got here and what happened before they were in plantations.”

“The most effective was the Middle Passage because I really felt bad about how the slaves were taken from their homeland and it spoke to me.”

“The Slave Codes because they really outline what we were learning and it talks about the treatment of slaves.”

“Frederick Douglass was the most effective because it was his words telling how horrible it was.”

“Frederick Douglass: I liked hearing an actual opinion or ideas from someone who was physically involved in slavery and knows how hard it was.”

“The story of Frederick Douglass gave us a first-hand account of the brutalities of slavery. Seeing how much disrespect for human life the slave owners gave their slaves made me absolutely appalled.”

I was very happy with the students overall emotional connection to the topic across multiple lessons.  I definitely invested more in the Modern Day Slavery and Frederick Douglass lessons. I think a lot of students preferred the Middle Passage unit because we watched a video. I knew the slave codes was the weakest component even as I was planning it. 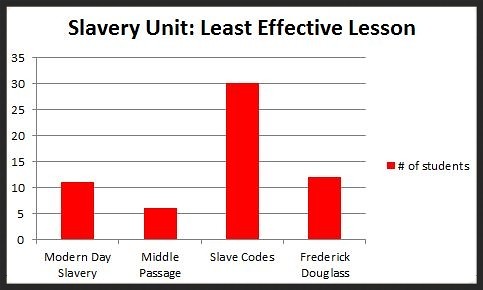 “Modern Day Slavery because we didn’t spend a lot of time on it and there wasn’t a lot to learn.”

“Modern Day Slavery I thought was the least effective because it did tell us what was going on today with slavery, but it did not give information about the past, and we were studying the past.”

“The topic of Modern Day Slavery was the least effective because we did not see the disrespect given to the slaves as much as we did in the other topics. Mr. Walp should still keep this lesson in to show that the issue of slavery is still alive.”

“Middle Passage because we were just told about it, we didn’t get to hear about it from someone who experienced it.”

“Middle Passage because I already knew that the slaves came to America with terrible conditions. I didn’t learn much new stuff.”

“The Middle Passage because I can’t comprehend what it was really like.”

“Slave codes. I think the stories and actual examples were more impactful and meaningful than the slave codes themselves.”

“The Slave Codes because you did not get any emotion in that.”

“Slave Codes because it was more the political side, and sometimes numbers and cold hard facts don’t sink in as much.”

“Frederick Douglass because it only showed the view of one slave.”

“I feel like the least effective lesson was about Frederick Douglass. I didn’t like this lesson because it’s ending was short and there weren’t a lot of details.”

“Frederick Douglass because we already knew all of that from the slave codes.”

Modern Day Slavery – Overall very solid. The point of the lesson was not to go into high detail about modern day slavery, but to build empathy. I think the evidence strongly suggests that it accomplished that goal.

Middle Passage – This lesson didn’t have a focus on one person, but it was a video so it was easy to visualize. I was this close to including primary source excerpts from Olaudah Equiano but I was concerned that it would be too overwhelming (in terms of workload) when combined with the Frederick Douglass narrative.

Slave Codes – Why oh why didn’t I include some runaway slave advertisements?  That was definitely a lost opportunity. This lesson was a classic example of knowing that it wasn’t quite right, but not sure how to fix it at the time. I think that the Virginia slave codes lesson was fine, but I overreached on the broader timeline of slavery. The main concern is that I don’t want to just focus on Virginia, it is important for students to realize that slavery was legal and enforced everywhere during the colonial period, not just the South. I think if I revamp the timeline and add some runaway slave ads this will be much better for next time.

Frederick Douglass – Looking back, I actually wasn’t super clear that this reading was supposed to represent the general condition of slaves, so it is easy to understand how some students might have thought it was too specific. Happily, several students were upset that we didn’t read the entire autobiography! I am totally interested in doing that next year. We could read the whole thing still do close reading for a few passages.