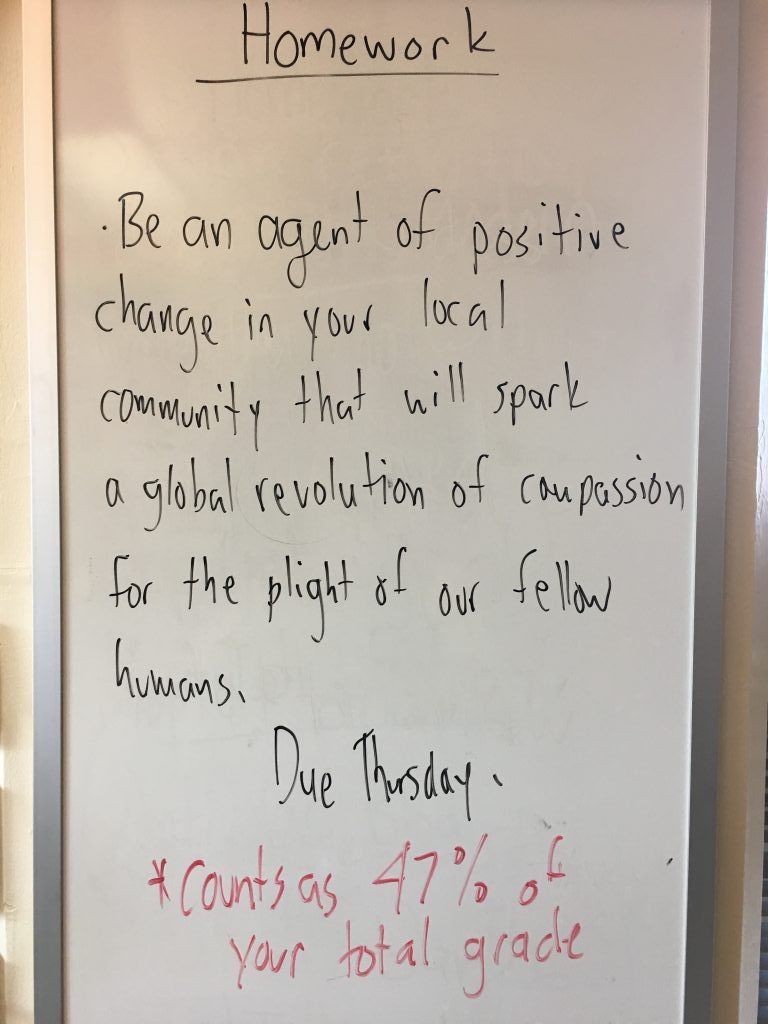 So I wrote this as a warm-up yesterday (more thoughts on warm-ups here).

I didn’t really have a conscious plan. I didn’t have homework to assign, and mostly wanted to write something compelling to see if the students would notice. I certainly wasn’t planning to write this, with the exception of the 47% part – that was deliberate at the end.

But hey, I knew it would at least get their attention so I let it ride.

We just finished our Middle East unit which was largely devoted to an examination of the Syrian refugee crisis. Heavy stuff under any circumstance – especially so given the recent changes under President Trump. To turn it up to 11, I teach in a community that has a large Syrian population. I have several students whose parents immigrated to the U.S. They have friends and family still in Syria. One girl told me that she had family members turned back at the airport when everything went down this past weekend.

The Middle East unit is always challenging. There is never a lack of pressing and emotional topics to explore. Refugees from civil war. Israeli-Palestinian conflict. Treatment of women in Saudi Arabia and AfPak Taliban regions. Etc.

The students consistently report that they find it important and interesting to learn about these topics. But that doesn’t make it enjoyable to learn about them. It’s a drag man. The world can be a cruel. 8th graders are at a developmental level where they can and should begin to grapple with big messy scary issues. I wouldn’t be doing my job if I didn’t challenge them to view the world with open eyes. But still…after a few years of teaching this unit, I’ve come to recognize that slump in their shoulders and grim faces as they leave the class. It’s not that they don’t care. They care so much, and they don’t know what to do with it. Knowledge is power, and a burden.

Back to the picture

So it totally got their attention. Fun fact – it takes at least 20 minutes for most 8th grade students to realize that any part of it was meant to be humorous. It’s because I added the “counts as 47% of your total grade” at the end. Students do not find it funny when you joke about grades.

But it would have been cruelly cynical to just say, “Haha, never mind, you actually don’t have any homework at all. I just wrote that because I was bored.”

So what followed was an impromptu speech where I just laid it all on the line. The fact that I know they value learning about these issues but it is emotionally draining. The fact that it is hard for me too. The frustration of not being able to actually solve these problems – and knowing that real people suffer from them.

I talked about the importance of simply being knowledgeable about current events. We can’t solve problems if we don’t know about them. I encouraged them to keep learning about important issues even when it is a little painful or challenging to their worldview. I asked them to talk to peers and parents about these issues. They know more about the Syrian refugee issue than 90% of the rest of the country at this point. Students, particularly young students, rarely appreciate their own content mastery.

It’s not enough to be nice and polite. That’s what most of them assumed I really meant at first. Just be nice – hard to argue with that, right? But, I went on to say that it wasn’t enough to not be a bad person. We need to actively look for, and sometimes create, opportunities to do good things. Small things for the most part. But small things matter. And small things have impact, particularly if a lot of people are doing a lot of small things consistently.

So I implored them to look the small opportunities to do good. You don’t have to organize the donation drive, but you can easily participate in it. Action breeds confidence and motivation. The way to fight despair is to keep swimming. Do the next right thing. You feel productive because you are productive. It’s a start. A small but necessary start.

I’m not ashamed to admit it. The Walp was on fire. I had a captive audience. I was doing it! I was making an impact! Looking back, my only regret was that I didn’t think to stand on my desk. 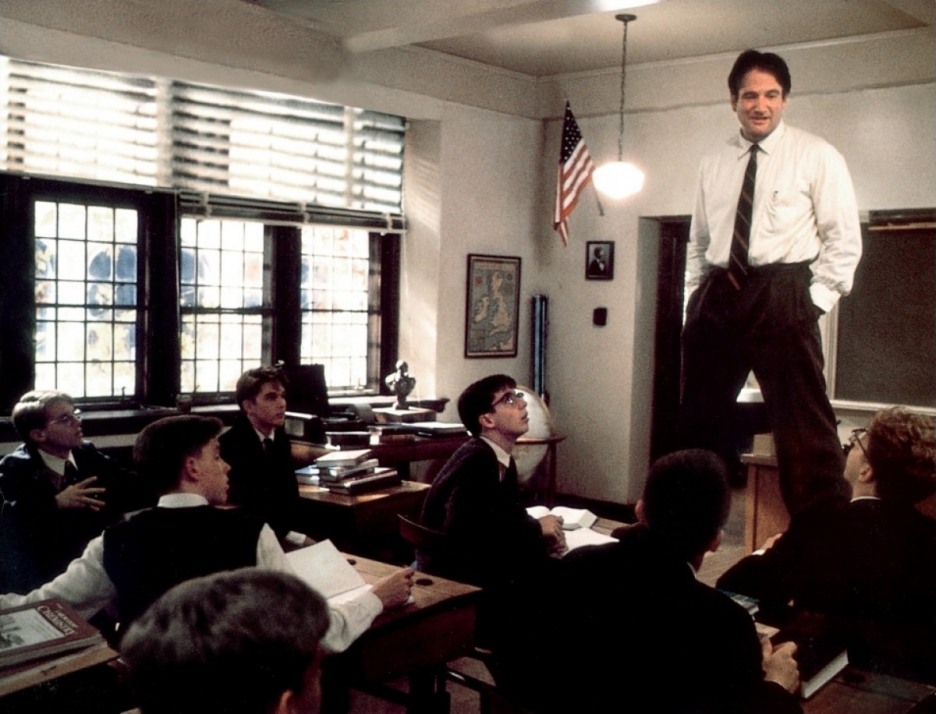 But there is a tiny postscript to my story – and it perfectly captures why I love working with in middle school.

At the end of the period, I had a very nice, but slightly nervous student ask me on the way out, “So, I’m confused…do we have any homework?”.

Thanks for stopping by, please comment with a link to your blog!

What is your inspired, impromptu standing on a desk teaching moment?