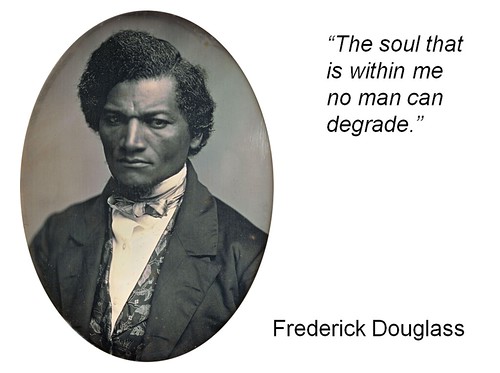 I won’t lie…although I don’t regret any of the lessons I’ve developed, or the discussions we’ve had in class, this slavery unit is starting to feel too long. It’s hard to tell though, we’ve had so many school cancellations and delays for weather, plus the President’s Day holiday, that my perspective is probably off. All told I think it will be three total weeks of class by the time all is said and done. A long unit to be sure, but not crazy long. But still, if I’m starting to feel it, then the students must certainly be ready to move on. Oh well, in the home stretch now.

After our introduction with modern day slavery, we examined the horrors of the Middle Passage, the Virginia slave codes, and a comprehensive timeline of slavery throughout all of the thirteen colonies. One of my overarching goals for this unit was to help my students to appreciate the full extent and power of the system that was in place to virtually eliminate any possibility that slaves would fight back or try to run away…because if they don’t understand that simple, powerful truth, then I fear that the inevitable, if unstated, conclusion would be that the slaves were too unintelligent, weak, or cowardly to do so.

As a culminating activity for our slavery unit, I wanted to use a primary source to help students see daily life from a slave’s point of view. Our curriculum does not extend to the mid-1800’s, but I felt that the Narrative of the Life of Frederick Douglass was the best overall resource available due to its relatively accessible language, vivid imagery, and well-known author. Additionally, I wanted to finally try my hand at a structured close reading lesson, something which I had never done before.

The Narrative of the Life of Frederick Douglass is a fairly quick read at only 188 pages, but close reading is a time intensive activity, so I knew that I wanted to work with an abridged version. Luckily, the work is in the public domain and available in full text online, so it only took an hour or so to create a customized primary source to fit perfectly within the unit! I decided to focus on the first few chapters where Douglass describes his life as a child in slavery.

I took about ten minutes or so to introduce Frederick Douglass to the class. When students arrived, the picture above was on the screen. When I asked students if they had heard of Douglass, many hands went up, but only a few knew anything concrete about him. The most common knowledge was that he used to be a slave. I gave a brief overview of his life, including some context on the national and regional attitudes toward slavery in his time. Then I showed a quick video introduction, which largely reinforced what I had already presented. On a side note, I found a surprising dearth of short Frederick Douglass biographies on YouTube given his importance in our country’s history. There were a handful of longer format documentaries, but the video below was one of the few worth using that was under 5 minutes run time.

The abridged text that we used included excerpts from three chapters of the Narrative, so I basically just repeated the procedure below three times. I think that pacing is a particularly important concern with close reading to keep it from getting bogged down. I actually used a little electronic stopwatch during steps 2, 3, 4 and 6. Even so, with the introduction, and a follow up day for the students to complete an activity reflection and develop a rough draft, the whole lesson will take us six days to complete.

Each chapter excerpt is only 3-5 paragraphs, so this part only took a few minutes. I read aloud while students silently read along. Since the passage was fairly short, I took a little bit of time to bring it to life a bit by speeding up, slowing down or pausing to build tension, and changing my inflection to cue students to particularly strong ideas. However, I did not give additional commentary or context…it’s OK for students to come out of this part with questions for clarification.

Once I finished reading, I told the students which paragraphs we are going to focus on for deeper analysis. (For each chapter, I pre-selected two paragraphs for close reading and discussion.)

Students had 3-5 minutes (depending on the class) to silently re-read the two paragraphs and use colored Post-It strips to highlight important information. I asked them to use one pink strip for each paragraph, and least one yellow strip for both paragraphs combined. At first, I said that students only needed to use a yellow strip to mark a spot that they didn’t understand but, surprise surprise, very few students were willing use a cute little flag to inform me and their peers that they didn’t “get it”. However, one simple change yielded great results! 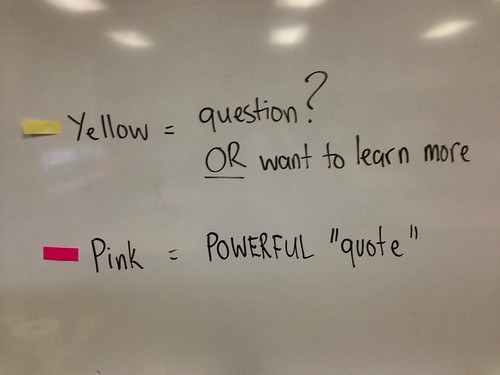 Each student was given a graphic organizer that aligns with the paragraphs of the reading.

Students had five minutes to complete annotations as Reader 1. I repeatedly reinforced the idea that they should respond to the reading, rather than just try to summarize it. Bullet points were OK. Opinions, emotions, and personal connections were OK. The Post It notes were a great anchor for this part, and I told them, “If you don’t know what to write, write about your Post It notes.”

Then, students had another five minutes to do second round of annotations as Reader 2. To ensure that they saw a variety of responses, I did not have students pair up. Instead, they exchanged papers in their small groups a different way (clockwise – counterclockwise – diagonal) for each chapter. They had to read the Reader 1 comments before they wrote anything as Reader 2. They could not repeat any information. However, they could respond to Reader 1 by agreeing, disagreeing, adding more information, etc. I think that the Reader 2 role was a bit tricky for students to “get” at first, but by the second time around, they were doing great.

Three to five minutes for students to talk about their annotations in their small groups. This is one of my most frequently used strategies, so the students are very accomplished at it by this point. I feel it is a terrific way for all students to share, and hear different ideas prior to, or during, class discussion.

I did not have set agenda for this part because I wanted to be responsive to their questions and concerns. Again, my goal was for students to have a general sense of the daily life of a slave, rather than recall any one specific fact. However, since we were only discussing two paragraphs of text, it was pretty easy to hit all of the main ideas in 15-20 minutes. I use numbered popsicle sticks for random selection, so I just grabbed four or five and started calling on people…summarize each paragraph, what quote did you pick and why, what else did you want to know that wasn’t in the text, etc.

Students had 10 minutes to complete a summary of the two paragraphs. We do 3-5 sentence journals almost everyday as warm ups or exit slips, so they are very comfortable with that. Even so, I was initially surprised at how much longer it took the students to summarize the text, but in retrospect, that made sense given that we were using a primary source instead of a textbook. 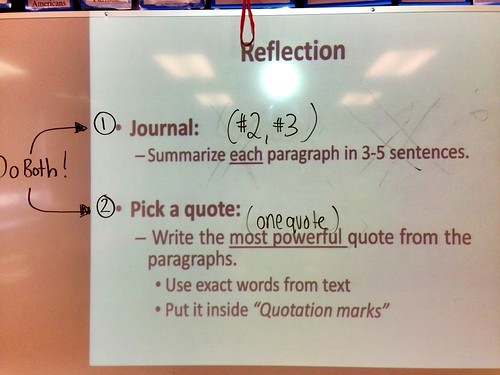 So, I am still in the middle of things (we are doing class discussion for the second chapter tomorrow), but it seems to be going well so far. I am definitely looking forward to the students’ feedback on their unit reflection journals!

Check out what the students thought about this lesson!

2 thoughts on “Close Reading: Narrative of the Life of Frederick Douglass”