So for awhile now I have been trying to incorporate student-generated questions into instruction. The most common method for doing this that I am aware of is the “Know-Want to Know-Learned” (KWL) model. It probably has a lot of different names, but that is what is was called when I went to college. The basic model is a three column chart. Students list their existing knowledge in the KNOW column, create questions or make predictions in the WANT to know column, and track their learning over time in the LEARNED column.

Sounds great, right? Then why have I had such a hard time figuring out how to effectively incorporate a formal KWL into instruction?

1. Remember to do it. OK, so this one is totally on me. I guess I should add it to the collection of Post-It notes on my desk and computer monitor.

2. Make time to do it. Easier said than done, right? However, my sense is that process takes a full class period. Completing the first two columns (KNOW – WANT to know) works great as a class activity because it creates easy opportunities for Pair and Share collaboration and student driven class discussion.

3. Timing. This one is trickier than it might seem at first. The great fear is that students’ will just respond with a resounding “NOTHING!” for prior knowledge, which will lead inevitably to an equally enthusiastic “NOTHING!” for what else they want to learn…and then we all just stare at each other uncomfortably for a few minutes before I change the subject. I believe strongly that students need a chance to browse the topic before starting a KWL graphic organizer for two reasons.

4. Make it meaningful (a.k.a Follow through). This is actually where I have stumbled the most. I have asked students to create and submit a list their own questions on multiple occasions…but then what? Now I have a big pile of questions. It’s too much information for me to process, which at least in part contributes to problem #1 and 2 for me. So, what usually happens is…nothing. I look at their questions. I feel super happy that they came up with awesome questions. I wonder what to do next. I don’t do anything with the questions. I have a vague sense of failure as a teacher.

Happily, I feel like I have finally connected the dots a little bit.

We are learning about the French and Indian War right now. Honestly, I came into the unit a bit disorganized. I spent so much time and energy on the slavery unit, that I just needed to take my foot off of the gas pedal for a few days and regroup. So, in true history teacher fashion, I decided it was the perfect time to watch a movie. The PBS documentary “War that Made America” is superb. Part One highlights the first two battles of the war, and prominently features George Washington. I started it about 8 minutes in, but it still ran slightly over one period.

We had a brief discussion after the movie about main groups that were fighting, and the different fighting styles that were used. In short, I asked the students to consider what the British have to do differently if they want to start winning some battles.

Then, I gave them a packet with some quick facts and two blank maps. I asked the students to try to find some patterns in the timeline. Typical answers included: the French won a lot in the beginning and the British won a lot in the end, they usually only fought during the summer months, and it looked like a lot of fighting happened in the year 1758. Then we colored in the before and after maps. I simply asked student to describe the difference between the two maps. Of course everyone pointed out how much territory changed, especially between England and France. (On a side note, I had a real “D’oh!” moment when I realized how much more sense it would have made to color British territory red and French territory blue. Oh well.) 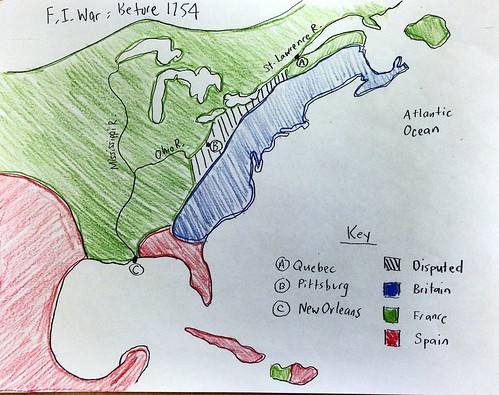 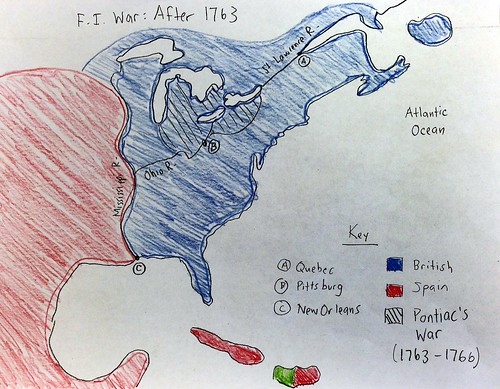 Then we spent two days in the computer lab. I asked students to find answers to key questions using the French and Indian War resources posted on my Scoop.it page. Their homework after completing their initial research was to create three questions where they wanted to learn more information.

That brought us to today.

Walking in the door I asked the students to summarize what they knew about the French and Indian War in 3-5 sentences. They could use their notes to help. Class discussion to fill out the “Know” column on a T-chart on the white board was quick and painless. All five classes generally came up with the same basic facts.

The British were fighting against the French.

They fought over land.

They were fighting over the Ohio River Valley.

Native Americans fought for both sides.

There were more Native Americans fighting for the French than the British.

George Washington was a British officer.

France won a lot of battles at first.

The British won the war.

France lost most of its land in North America.

It was also called the Seven Years War.

Cool so far. To keep the mental juices flowing, I then asked students to categorize each fact as “France” “America/British” “Native American” or “Other”. They could use more than one category for each, but I preferred if they picked just one, otherwise we would quickly fall into an “all of the above” trap. I clarified that it didn’t matter which category they used, as long as they could explain why (The fact that it was also called the Seven Years War was a prime example of the “other” category).

Then we moved on the “WANT to know” column. I asked them to take a few seconds and categorize the questions they made for homework into the same groups (French, American/British, Native American, Other). They then had ten minutes talk with anyone in the class to complete a task sheet to find 8-10 (depending on the class) questions, including the three questions they already had from their homework. Finally, I asked the students to identify the two most important questions on their list with a star. The last ten or so minutes of class was spent taking volunteers to share their questions for the T-chart. This is where it really felt like everything was paying off, they came up with terrific questions.

Did Britain and France always fight?

How many people died?

How many people died for each group?

How did the British win?

Why was the Battle of Quebec important?

Did France ever go on the offense in the war?

Why did the British fight differently from the French and Indians?

Were the Native American axes more powerful than guns?

Why did the Native Americans have guns?

Why did more Native Americans fight with the French?

What happened to the Native Americans after the war?

What is Pontiac’s Rebellion?

How did George Washington become a British officer?

Why did France help America during the American Revolution?

Why did Spain help France?

What if France had won the war?

How was the rest of Europe impacted by the war?

What if more Native Americans had fought for the British?

How did the colonies deal with all the new land they got from winning the war?

I did a few things during this discussion that I think were really important to help it be more successful than in the past.

I feel pretty hopeful about the elusive KWL finally working out for me. I’ll have to ask the students for their perspective to be sure. Just for kicks, I also want to somehow incorporate their questions into the unit assessment as well. More on that later I guess.

6 thoughts on “Getting a handle on KWL”