Our English classes are studying literature from the Holocaust, and today Holocaust survivor Julius Jacobs came to to tell his story to our entire 8th grade class. In addition to visiting our school for the past ten years, Julius has spoken to dozens of other schools, churches and civic groups.

I’ve took Holocaust studies as an undergrad, read survivor autobiographies, and I’ve been to the Holocaust Museum in D.C., but I’ve never personally had the opportunity to hear a survivor account in person. Of course, it’s just different…more powerful. Basically, I got to have the experience that I wanted my students to have when we looked at modern day slavery.

It was particularly crushing to see and hear the Julius’s anguish, even 70 years later, as he recalled the last time he saw his mother and father at “the selection” in Auschwitz. Julius was actually selected not once, but twice for selection himself, and both times was saved by good fortune.

The last question Julius took from the a student in the audience was, “Why do you keep telling your story?”

Julius’s answer was elegant and heartfelt. He swore to God that if he survived, he would spend his life telling others what happened. He wants us to never forget what people are capable of if they are governed by fear and hate. Do not judge others for their differences. Our differences do not matter. We are all one people.

Sometimes life just drops a teachable moment in your lap.

When we got back to class, I asked the students to consider the similarities between experiences of the Jewish people during the Holocaust, and experiences of the African slaves. Here are some of the comparisons they came up with.

Both Jews and Africans were:

Killed in the millions.

Forced to work as slaves for the benefit of their masters.

Mistreated or killed by their captors for any reason…or no reason.

Died from starvation, disease and suicide.

Forcibly separated from their families.

Persecuted simply for belonging to a certain group.

Treated as “other” or “less than”. 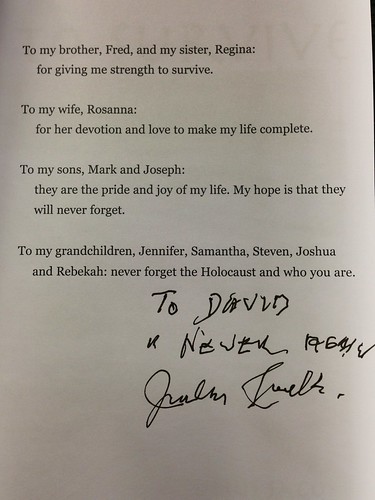